About 80 miles southwest of Roanoke, being satisfied with my morning progress up monotonous Interstate 81, I leaned the big Suzuki for the off-ramp to take a much-needed break and reward myself with leisurely two lanes for the rest of the way into the Star City.

Virginia’s Blue Ridge Mountains serve as a playground for motorcycle travelers with its abundance of history, natural wonders and rolling hill country, none of which I realized could be experienced very well from the superslab. My journey would, eventually, take me to the annual Overland Expo at Infinity Downs near Arrington and to the solemn site where the American Civil War ended.

The V-Strom 1000, along with my slightly numb throttle hand, seem to prefer the leisurely eastward trek on U.S. 52 to the New River, which seems like a symbolic crossing into central Virginia. At the river, I slow to admire a flock of geese resting in the shallows on their autumn journey southward. Just as I pass under Interstate 77, I notice a tall stone tower high above the river and soon divert to explore Shot Tower State Park. Here, some 200 years ago, industrious pioneers melted lead from nearby mines and poured them through a sieve atop the 75-foot tower down into an additional 75-foot-deep pit into a water kettle to make shotgun pellets. Park officials say it is only one of three in the nation and perhaps the only one in the world of its particular design.

In Hillsville, I spot the sign for the road I really wanted to take all day, U.S. 221. Getting a late start this morning meant I needed to chew up a few hundred miles on the interstate to make up for lost time. U.S. 221 roughly parallels the Blue Ridge Parkway. While the vistas are not as sweeping, the higher speed limit and lack of tourist traffic make it a more suitable route to Roanoke today. Having traveled portions of it in the Carolinas, this unknown section of 221 in Virginia appealed to me.

Soon the road enters the rolling countryside. On the crest of each hill, I can see the faint blue wall of the Blue Ridge Mountains on the western horizon. The old road follows the natural valleys, probably carved out over the centuries by wildlife and early settlers. Newer roads tend to bulldoze nature into submission instead of embracing the landscape.

I pass high pastures with grasses bleached a deep tan rising and falling beside me. The gentle slopes of the denuded hills remind me of a woman’s bare shoulder. For a minute, the loneliness of the long-distance rider stirs. Memories soften my concentration. Existential doubts seep through the motorcyclist’s focus to whisper: why endure such a long ride with so little comfort? I start to notice all the small aches from hours in the saddle.

Almost as a salvation, the road suddenly drops into an S-turn across a small creek and twists uphill into the forest. It’s enough to clear the mind as I sway the bike through the bends and regain the disciplined attention motorcycling demands.

For an hour, I travel along U.S. 221 with no stop signs or red lights to interrupt the ride. I’ve yet to put a foot on the ground since I made the green light in the small town of Floyd. And indeed, it would only be in the crowded suburbs of Roanoke that halted the bike’s motion. Before reaching those suburbs, the highway arrives at the community of Bent Mountain, which sits at the end of the long plateau.

Switching from a gentle country road to a three-lane serpentine, U.S. 221 suddenly drops off the mountaintop. There’s a view of the skyline of Roanoke in the distance beyond the precipice to my right, but I don’t have much time to enjoy it since the curves come steep and fast. Soon after, the city appears. Traffic floods the road ahead of me as the countryside recedes in my mirror.

I decide to make a detour and visit the landmark most visitors to Virginia’s Blue Ridge can recognize, the Mill Mountain Star. This large illuminated five-pointed star began as a Christmas decoration in 1949, but its popularity made it a permanent attraction. It’s listed on the National Register of Historic Places. The access road, which also leads to the Blue Ridge Parkway, takes you up 1,000 feet to the park where the overlook offers a panoramic view of Roanoke and the mountains surrounding it.

Early the next morning, I set out from my motel for the Overland Expo East, a three-day festival and trade show celebrating 4x4s, outdoor gear and off-road adventure motorcycling. The East Coast version of the popular event features workshops, demonstrations and book signings. I packed my well-worn copy of “Jupiter’s Travels” and look forward to meeting author Ted Simon, the man who piloted a Triumph Tiger around the world in the early 1970s before adventure touring was even a concept.

I found Simon at the authors’ tent along with acclaimed travel writer Sam Manicom. Simon happily provided an autograph and graciously accepted my praise, offering thanks in his quiet British accent. Both authors greeted their fans, signed autographs and promoted their latest books. For Manicom, the Virginia venue offered some great riding opportunities.

“This is my third time riding the Blue Ridge Parkway,” said Manicom, author of “Into Africa” and “Under Asian Skies.” “The first time was gorgeous, I was here at the exactly the right time in the fall. The second time it was hissing with rain. Banks of fog and I ended up dumping the bike because I couldn’t see where I was going.”

The weather drove him back to lower elevations, which he said he didn’t mind too much.

“Plan B doesn’t suck in this part of the world,” he said. “Sometimes people say the best journeys are the ones on the roads you didn’t anticipate riding. That’s so true. That’s where the discoveries of the things you didn’t know are.”

The expo moved to central Virginia this year after several years in the Asheville, N.C., area. The new venue, Infinity Downs, offers more room for vendors and off-road demonstrations of both 4x4s and motorcycles.

“The venue has been very accommodating,” said Rachael Elseman, an admin support specialist with Overland Expo. “We really enjoy the landscape and the terrain and the fact that we can expand and grow. The venue definitely allows for the event to grow in the next couple of years, which is something we’ve been looking for. The last few, the venue has been very intimate. This one will let us develop more and we’ve got a lot more options.” 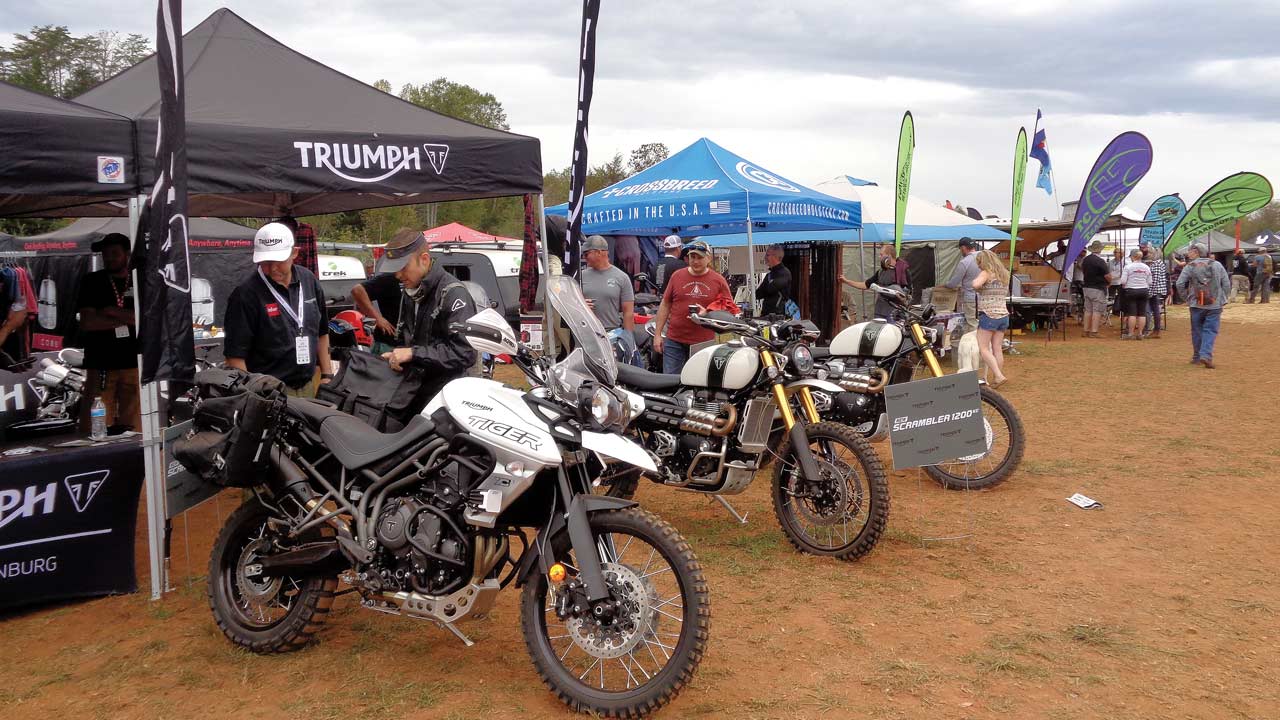 Visitors to the Overland Expo check out some of the new Triumph models on display at Infinity Downs. 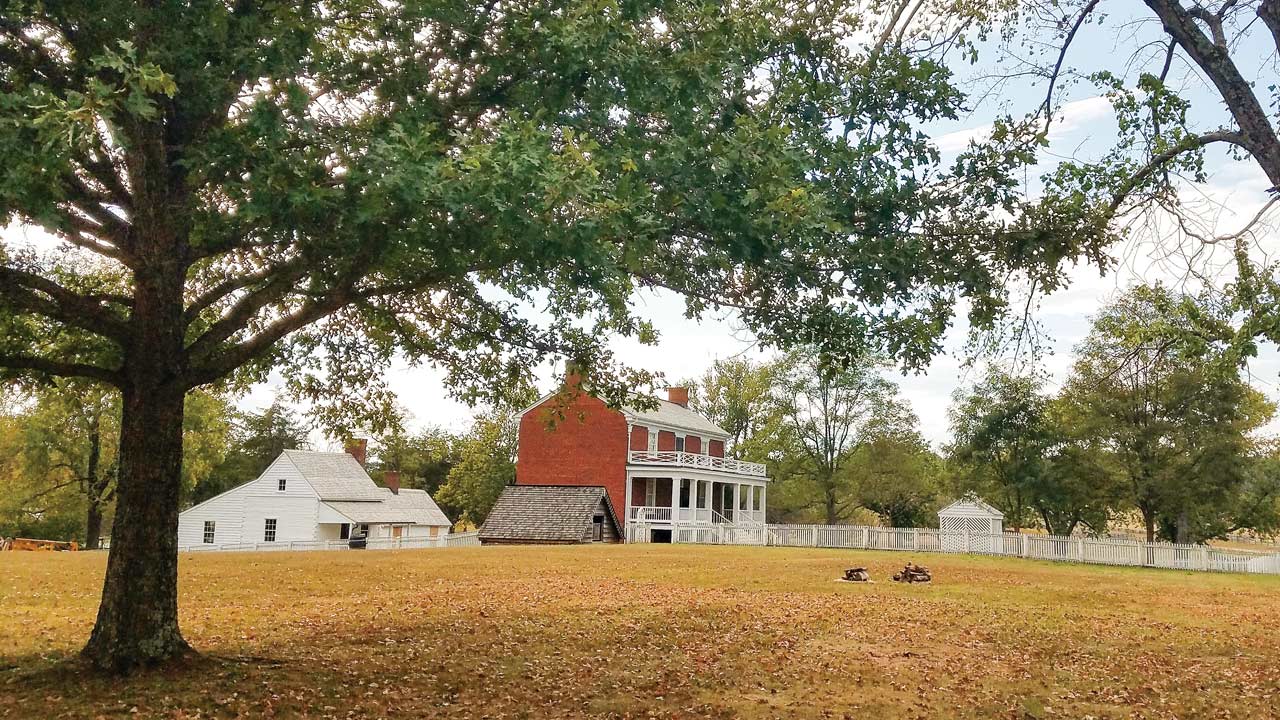 The Civil War ended inside this house in April 1865 when Gen. Robert E. Lee surrendered to Gen. Ulysses S. Grant. 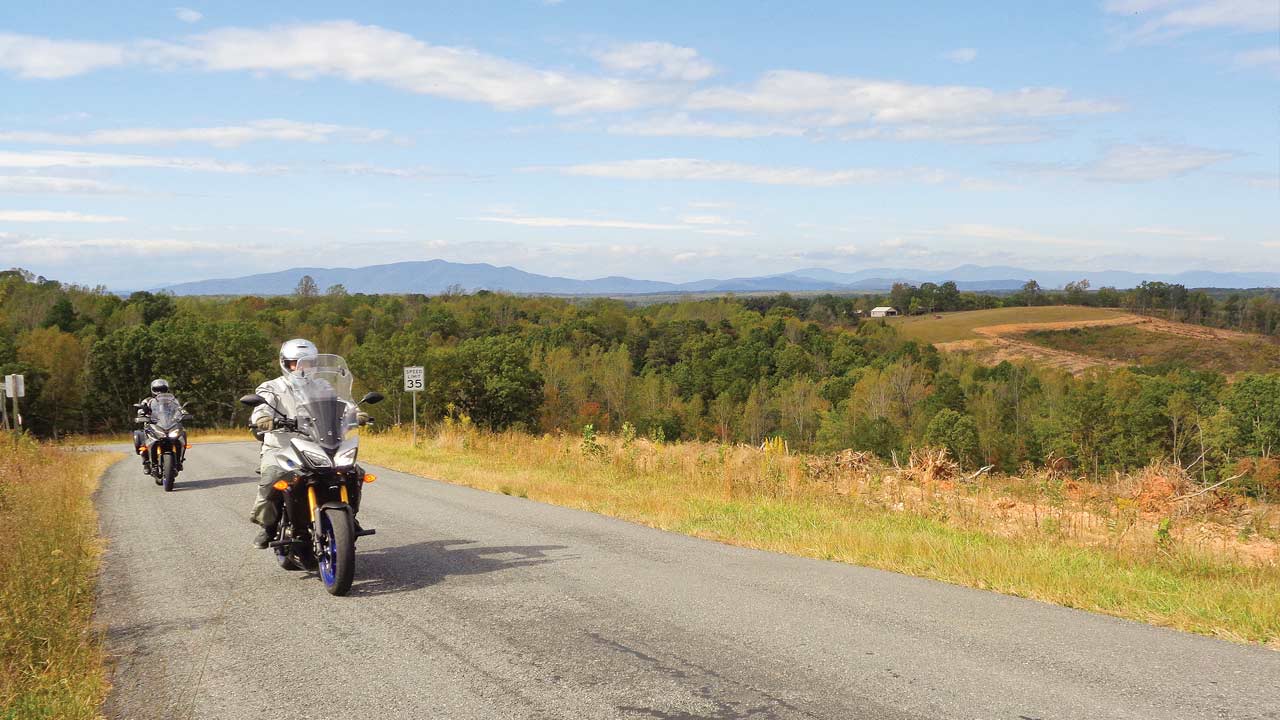 Virginia’s Blue Ridge Mountains serve as a playground for motorcycle travelers with its abundance of history, natural wonders and rolling hill country.

Overland highlights the newest innovations in vehicle-based adventure travel. The grounds fill with every type of off-roading equipment imaginable, with one area of the fairgrounds devoted to motorcycling. Getting out and exploring the planet serves as the theme for the event.

“We like to get outfitted, get trained, and get equipped. That’s kind of our motto,” Elseman said. “We want you to come and see the options, have different examples and experiences, but then also be trained so you know how to drive your own vehicle so when you’re out exploring, you can do it safely and know how to recover if something goes wrong.”

Each day the organizers offer a schedule of workshops and demonstrations for visitors. On a hill above the vendors, dual-sport motorcyclists practice on an off-road course while 4x4s get their own terrain to tackle.

“We like to push the training side of things. We’ve got so many great classes. It’s kind of a community feel,” Elseman said. “The person teaching the classes has been out doing this for 20 years and they’re here to share their knowledge with the up-and-coming people. That’s kind of our mission.”

Overland also holds a western expo in Flagstaff, Arizona, each May. They also have plans to add a third event in Colorado next year.

“It’s definitely growing. I think you have to some experience it for yourself. There is nothing else like it in the world. It’s not just for experienced and advanced people. We love having beginners and people who are new to sport as well, because this is a great place to learn and meet people,” Elseman said.

Having gazed at all of the impressive rigs at Overland Expo, and mentally trying to figure out a way to make one my full-time home on the road, I headed southeast to my next destination. While refueling at a station, a fellow rider on a dark red Kawasaki Concours pulls in next to me. He’s a local rider, and as is my habit, I always ask locals if there are any good roads around. He points me in a direction 90 degrees from the path I was traveling, but assures me it will be worth the trip.

Soon I find myself in a harvested pine forest with views of the Blue Ridge along the horizon and the orange soil rolling into the distance. I stop to enjoy the view when a pair of Yamaha adventure bikes passes, pausing long enough to chat and invite me to join them. But I’m heading the opposite direction, bound for Appomattox Court House National Historic Park.

Before long, I find myself in picturesque hay fields dotted with rolls of golden straw. Signs point the way to where Gen. Ulysses S. Grant’s headquarters stood on an April morning in 1865. Another marks the path to a monument to the North Carolina units, who were the last ones to fire an artillery volley here before the armistice.

With only the eerie crunch of gravel beneath my boots, I venture to the McLean House, the spot where Gen. Robert E. Lee surrendered his forces and effectively ending the Civil War. The brick house is a reconstruction since it was dismantled after the war in hopes of installing it in as a monument in Washington. But the National Park rebuilt it in the 1940s, and it still gives visitors a sense of the scared.

The park features several historic buildings and exhibits along with hiking trails and ranger-led history tours. Admission and parking are free.

As the sun set casting shadows on the brick buildings and white-picket fences, I mounted up and headed south, keenly aware that the events that took place in that small living room forged a lasting peace and united us once again as Americans. The mountains in the distance still stand as a witness.